"Are you harvesting dandelions?" my next-door neighbour asked me, hopefully.

I wasn't at the time - that was a few days ago and I was getting some wild garlic to go in my dinner - but today is a different matter. Today is St George's day, the traditional time for picking dandelion flowers to make wine, and a sunny morning is a good time to pick flowers, so I went round there to - as she put it - do her weeding for her.

I have weeds of my own.

In between the question and the harvesting, though, I'd made a start on the brewing process. I'm actually planning to make beer, not wine, and I've bought a couple of jars of malt extract. I also have half a sachet of cider yeast, but I just wondered... It is possible to brew with wild yeast.

Where do you get wild yeast from? Well, it's everywhere. You're almost certainly breathing in yeast spores right now. However, it tends to be more concentrated in some places, on flowers and fruit in particular. I've never had enough apples to make cider, but I believe it can be made with wild yeast quite reliably using the "chuck it in a bucket and leave it" method. On the other hand, I have bad memories of my dad's attempt to make dandelion wine with wild yeast when I was a teenager: We ended up with a bucket of mouldy dandelions. I'm a bit more cautious about it these days, as well as more knowledgeable.

Rather than risk my entire brew, these days I start with a small quantity to make sure it's doing what I want first. Of course, alongside all the yeast spores in the air, there are all sorts of other things as well. The trick to cultivating the ones you want are to provide food and an environment that particularly suits them, and hope they win out in the battle for survival. Yeast has two phases of growth; in the first phase, when it's multiplying, it needs oxygen. After that it'll get on and produce alcohol without oxygen. To start with, then, it helps to leave it open to the air. Yeast eats sugar but, like humans, it doesn't do too well on sugar alone and needs some other nutrients. Malt extract contains plenty of nutrients, so I use that for my starter, rather than refined sugar.

So... I gathered some dandelion petals, carefully removing most of the green parts. Just a hunch, but I suspect they wouldn't be helpful at this stage.

I mixed them with malt extract and water, then tasted and decided it wasn't sweet enough, so added a bit of white sugar as well, and left in a warm place.

After a couple of days there was some sign of activity. I sniffed... and it wasn't great. I've learnt from experience not to panic at this stage. There will be various thing living in there, competing for dominance. So long as the yeast wins out in the end, it's all good. Sure enough, another couple of days on, and it's smelling distinctly wine-y. 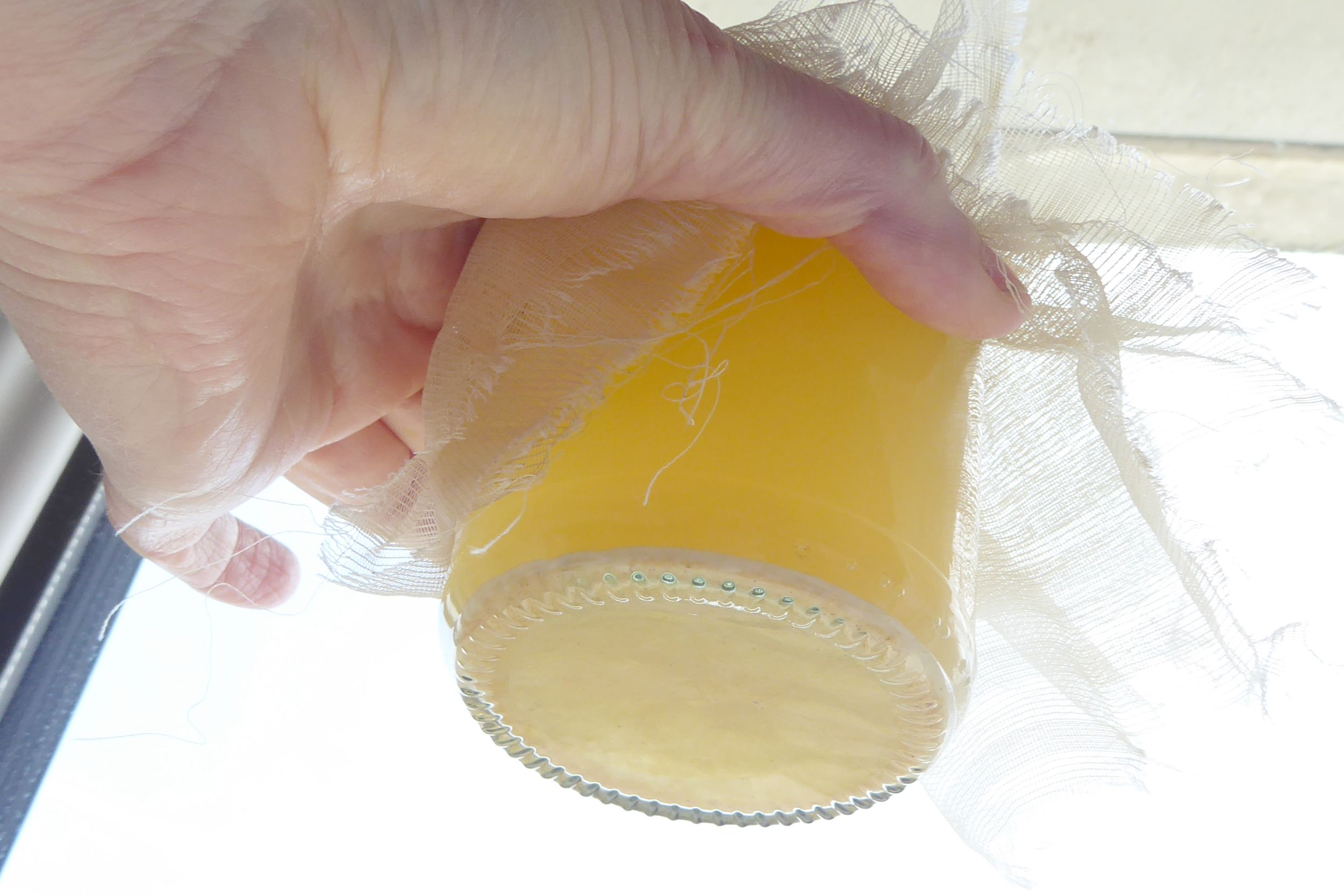 The liquid has gone cloudy with yeast cells and when I hold the jar up, I can see them settling in the bottom.

Hooray! I have wild yeast! But why? You could be forgiven for wondering why I'd bother, especially when I have half a sachet of cider yeast already. The answer is partly because it amuses me, but also because of the flavour. You can brew with just about any yeast, but different strains will give different flavours. Cultivated yeast gives nice, predictable results whereas wild yeast is a gamble. When it pays off, it can produce far more interesting, complex flavours than I get from the cheap brewing yeast that I'd buy otherwise.

The beer I'm planning to make with this will be flavoured with a mixture of dandelion flowers and dock roots. I'll feed the yeast with malt extract and a bit of white sugar in a bucketful of water. Wild yeast can be a bit slow to get going, which I learnt while looking up yeast nutrient just now, is probably due to a lack of zinc. I might consider supplementing, if I get round to buying some zinc, but probably won't.

My next job is to pick over the dandelions I gathered this morning, toast and boil the dock roots (after deciding whether I can be bothered to use fresh, when I have some dried in the cupboard), and put it all together in a bucket. Then I wait. The result could be terrible or it could be amazing - only time will tell.