If you'd like to know how to make mincemeat, consult Delia, or someone else who knows what they're talking about. This is how I do it. 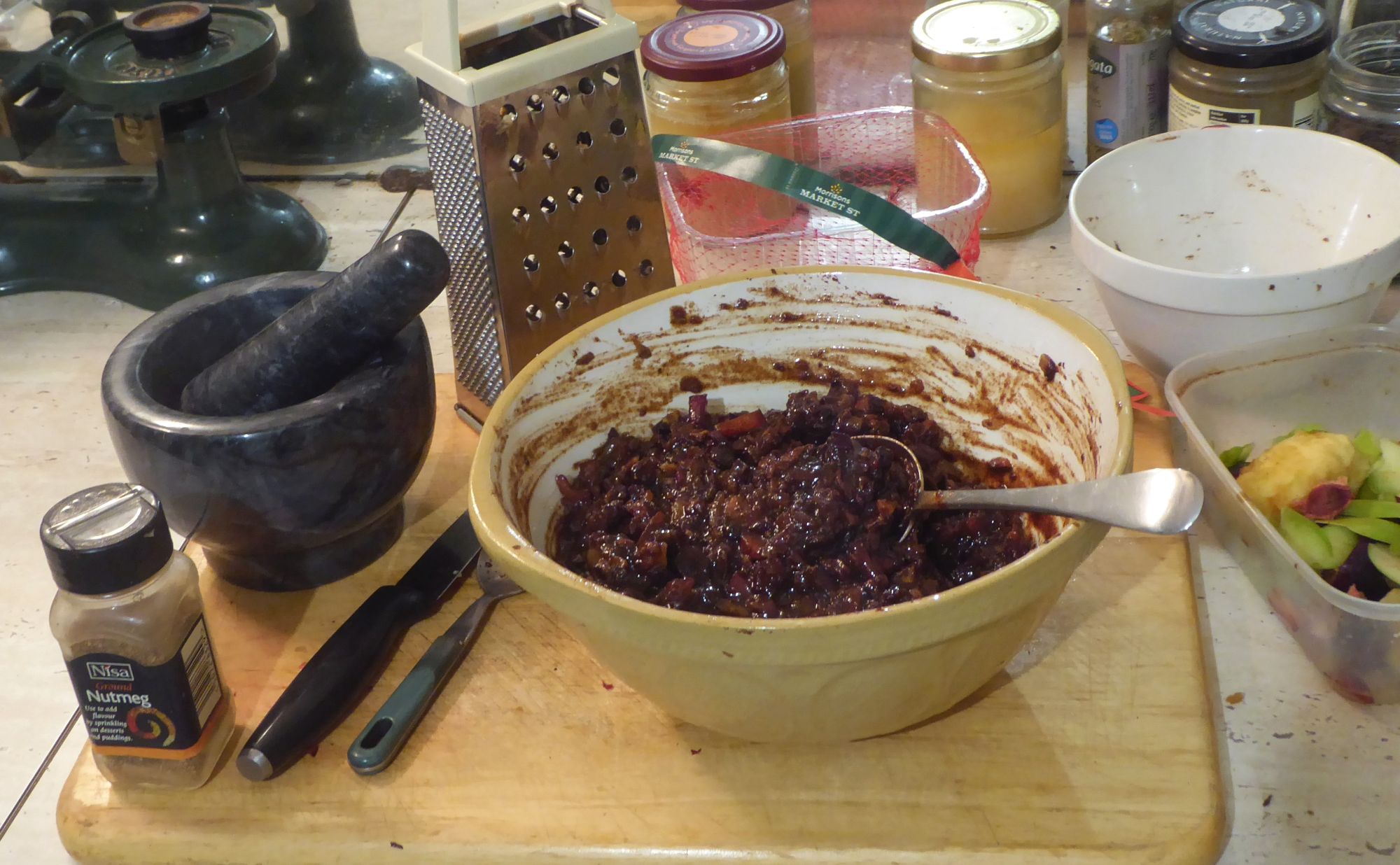 Get the cheapest mixed dried fruit - the kind with plenty of chopped peel in it - chop a few handfuls of that (it'll absorb liquid better if it's cut. It also disguises the cheapness), add a handful of currants, also chopped (that's fiddly!) and leave in a basin with a good slug of brandy over the top. Mix that from time to time.

Those plums that have been sitting in the fruitbowl for a while... trim off any bits that look unappetising and chop the rest finely. Those can go in.

One Bramley apple from the discounted bagful I bought the other day - peel and grate that.

The remains of jar of home-made marmalade. It must be four years ago that I made that! The only reason I haven't eaten it is that it's somewhat fermented. That won't be noticeable with the brandy and spices - that can go in.

Have I still got that sloe pulp left over from making sloe wine... um, must be a couple of years ago? Oh yes, there it is - good as new. A good dollop of that can go in.

Treacle - I'm sure there should be treacle. Pour a bit of that in.

I like crystalised ginger - one piece of that, finely chopped.

Am I onto the spices yet? Might as well be. What have I got? Cinnamon... nutmeg - oh, here's some ground nutmeg - I wonder how long that's been there? That could do with using up... cloves - grind a few of those up in the pestle and mortar. How many - four? five? That'll do. Oh, here's a jar of mixed spice - smells reasonably fresh - put some of that in as well.

The mixture's looking fairly wet at this point, so strain off the brandy before adding in the dried fruit. Taste the liquid - yes, that's definitely brandy. Taste the mixture - ooh, that was too many cloves.

Add some dark brown sugar (not muscovado, a cheaper alternative). Chop and add some more mixed, dried fruit. Is that another plum behind the bowl there? I must have missed that earlier. Chop that and add it.

Take a recipe book off the shelf to see what else I've forgotten. The Great British Book of Baking book - surely that'll include mince pies. Yes... "About 400g of best mincemeat" - oh, for goodness sake! Try Delia - I should have asked her in the first place. Here we are... "I give you a warning here. Once you've tasted home-made mincemeat in mince pies, you'll never again be able to revert to shop-bought." Hmm, not sure about that, Delia. To be fair, shop-bought has got a lot better since she wrote that.

Right, what have I missed? Almonds - I was wondering whether to include any nuts. I can't find the flaked almonds, but I've got ground - they'll soak up some of the liquid. Chuck some of those in. Maybe a few finely chopped walnuts, too.

How about some apricots - I'm sure I've got some here somewhere... oh yes, there they are! Chop and add a few of those. Oh go on then, I'll put some cranberries in, too. What else did I buy them for, really?

How are we doing? Taste again... that's not at all bad. I'll leave it a bit for the flavours to blend. By the time I've finished that brandy it'll be delicious, I'm sure.